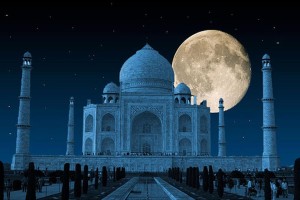 The Taj Mahal- spectacularly built form and my all time favourite! Its amazing features amuse not only me but even archaeologists. I just love the Taj Mahal not only for its beauty but also for the concept and the reason behind its construction- the feeling of love.

The Taj Mahal- symbol of love! This symbol is also one of the Seven Wonders of the World and is also being rated with highest public votes all over the world. The Taj Mahal is India’s pride and also a well established tourist spot. It attracts tourist from all over the world. Famous for its magnificent and beautifully carved dome at its centre, the building is a tomb built by Shah Jahan to devote to her beloved wife Mumtaz Mahal. Taj looks vivacious especially at sunset and sunrise. Even a glimpse of it creates an aura of peace, love and serenity.

The history of Taj Mahal is quite touching. Love, the feeling that binds the universe is the base of this enormous marble structure. A structure made up of white marble depicting the purity and massiveness of the love of a ruler for his wife can be obviously seen through it. This mausoleum is marked as the World Heritage Site by UNESCO which is a great deal for any monument and having a world heritage site is a thing to be proud of for any country. 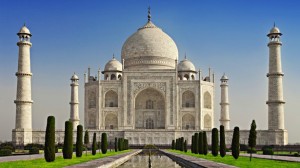 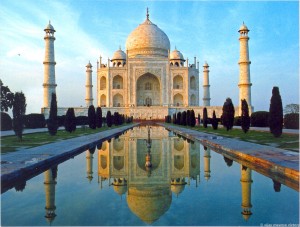 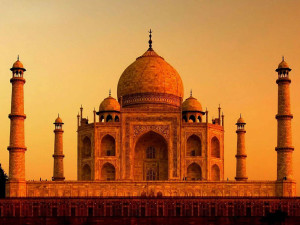 Location of the Taj Mahal:

The prettiest of all and a synonymous symbol of love and lust is situated at the bank of the holy river Yamuna in Agra, once capitol of Mughal Empire. The location is such picturesque that it attracts every human soul. The use or white marble is so explicit with the

ornamentation that to compete with the uniqueness is difficult even at this era. The work started in 1631 but was completed by 1653. Detailed implications and delicacy is supreme in this old structure.

History of the Taj Mahal:

This epitome of love was built by Emperor Shah Jahan for his wife whom he loved so deeply that he erected a whole new structure expressing his love and remorse for his wife after her death. This structure was built in a span of 22 years of time and with the help of 22,000 masons, labourers, calligraphers, painters and other artisans from whole country and even from countries like Iran. A service of around a 1000 elephants was taken for the dream of Shah Jahan to be built with such spectacular carvings.

The tomb of Shah Jahan was built near his wife’s grave. The use of white marble everywhere give it an exceptional pleasant experience while viewing this awesomely designed building by architect Ismail Afandi. Besides many other architects and designers were also called for designing various components such as Qazim Khan designed the gold finial at the top of the dome.

The Taj Mahal- Symbol of Love:

Now, the love was the base of this massive and magnificent building. It is almost impossible to rebuild this structure again with the 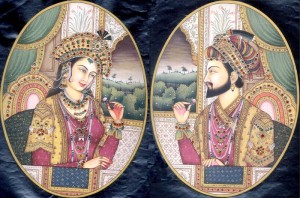 same delicacy, ornamentation and most importantly, feelings. The appropriate feelings for the king for his queen can be judged by this structure clearly. The carvings and the calligraphy also depict the story of love. The beauty of Taj is enhanced by the site chosen by the king. The sunset and sunrise from the Taj at the bank of the river enhances its beauty.

The love, remorse of separation and the grief, everything can be felt by looking at this structure. It is so built that the beauty of the outer and inner structure is enhanced at every bit.

Description of the Taj Mahal:

The magnificent fantastically built form of Taj Mahal is quite high. Covering a total area of 42acres the built up height is 171m which is quite huge. The structure with high ornamentation with precious stones and built in white marble has exquisite planning with concepts of Char Minar and Char Bagh. The jali design work was done with the help of skilled labours and masons and the design work was the only one of that time and is even appreciated now because of the minuteness of the jali work. The carvings were one of the kinds in that scenario and had awesome sculpture view. 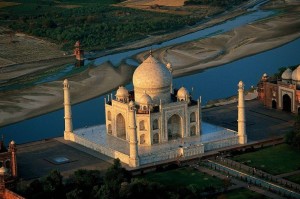 The concept of arches was prominent in the Mughal Buildings. This concept can be seen in the tomb and also on the entrance. The big mass of dome has a golden finial on top of it. According to Muslim tradition the area of the tombs should be plain and hence, the tombs were placed in a simple designed area. 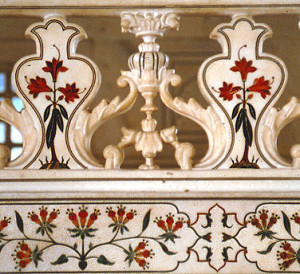 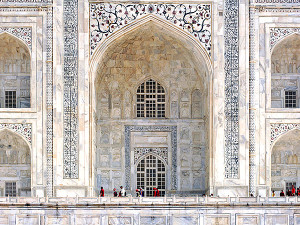 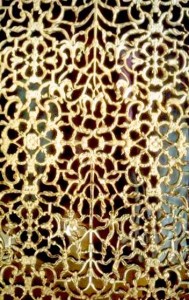 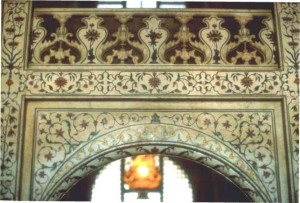